WebRTC In IoT – Use Cases And Applications

By Admin
IoT, IT & Outsourcing
No Comments

It was the year 2011 when Google launched an open-source project to bridge the communication gap between web browsers and native mobile applications. Called WebRTC or Web Real-time Communication, this API-based communication protocol allows for the transmission of data, video, audio and more across web browsers and smartphones. The major advantage of WebRTC has been the fact that it does not require the presence of any 3rd party plugin to facilitate the transmission.

Being universal, where it works seamlessly across all smartphone OSs and web browsers, it opened up new avenues for users to communicate with others and transfer files and media from whichever device or medium they were on. For instance, the simple feature of WhatsApp to let you make calls, send texts or transfer media files without having to install a desktop app is the result of WebRTC. Today, several companies around the world are working on this technology with the market share led by mammoths like Amazon, Facebook, Google and more.

When the concept of WebRTC hit the market initially, there was a lot of skepticism around it. IoT applications experts did not see potential in the integration of the technology with WebRTC. Besides, a lot of tech enthusiasts also were under the impression that the two tech concepts were more like oil and water that would refuse to mix.

However, years later, after several innovations and evolution, the two technologies have combined to streamline peer to peer communication among connected devices and bring about disruptive use cases to the market. For the uninitiated, use cases brought out by this revolution can be classified into two major categories –

Device-to-Cloud – where the communication is mainly between a connected device and the cloud. This could be a fire sensor that picks up sparks from an environment and triggers a notification to the cloud for immediate response, an embedded system sensing a probable equipment malfunction, drones assessing the health of telecom towers and more.

Device-to-Person – where the communication is between a connected device and an end user. Imagine a smart home solution that allows users to watch footage of their premises in real-time from their apps. This is an ideal example of device-to-person communication. This could also be footage from baby or pet monitors, video-powered doorbells and more.

With the basic understanding, let’s take deep-dive into the wide array of use cases in this space. 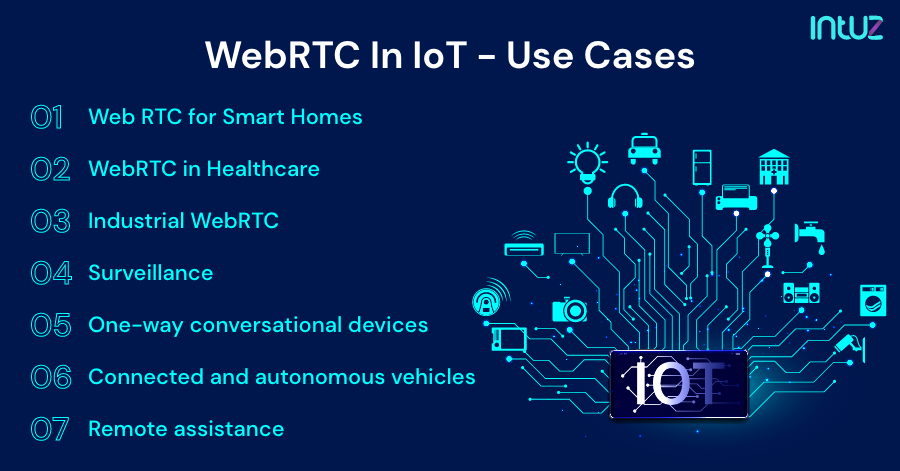 WebRTC and IoT: Use Cases

Home automation solutions are ideally IoT ecosystems with super-specific purposes. You have a wide range of sensors, devices, cameras and more connected to a network, working together and ensuring the safety and security of properties and assets. The role of WebRTC here is to streamline communication among devices and to users, providing optimum information at all times.

From door intercom services and smart mailboxes to those that safeguard package deliveries, WebRTC is in charge of transmitting audio/video data across mobile and web apps. Besides, with sophisticated technologies like machine learning and artificial intelligence, WebRTC can even trigger notifications to nearby law enforcement offices in real time.

Yes, WebRTC is influencing healthcare as well. One of the most beneficial offerings in this space in recent times has been the advent of telehealth or mhealth. With the ability to connect remote places and patients to specialists and doctors, mhealth is truly redefining healthcare and patient care. WebRTC arrives as a value addition in the spectrum to facilitate live video feeds for teleconferencing or virtual consultations, remote therapies, clinical meetings, remote observation and diagnosis and more.

From the device-to-cloud communication perspective, we have connected health devices constantly keeping track of patient vitals and specifics, sending out any probable anomalies to concerned doctors instantaneously.

IoT development services have sort of revolutionized the industrial and manufacturing space. Even the most conservative industries have not come out of conventional setups and done away with obsolete equipment and work ecosystems. Today, they are giving in to evolving landscapes by bringing in digital transformation into their enterprises and wings.

As far as WebRTC is concerned, it is paving the way for smart factory environments by equipping machines and the intelligence modules behind them with data for automation and predictive analytics. From sensing overheating equipment and assessing machine health through wear and tear to instantly spotting occupational and environmental hazards, WebRTC is leading the space with diverse use cases and solutions.

The surveillance industry has evolved rapidly in recent years. From being just passive units in a security ecosystem, CCTV cameras are teaming up with other sophisticated devices and hardware peripherals to offer optimum safety, security and peace of mind to users. From protecting assets and properties to autonomously picking up instances of spark, water or gas leakage, fire and more, surveillance devices are becoming smarter by the day.

This has mainly been due to the incorporation of IoT, WebRTC, artificial intelligence and other superior technologies today. With the incorporation of WebRTC, surveillance units can now live stream footage in real-time to portable output devices laptops and smartphones regardless of user location.

Besides, the communication here is not just one way. Users can use their devices and the surveillance system’s dedicated app to control a CCTV camera, trigger alarms or sirens, intimate law enforcement officers of intrusion and more.

Technically called one-way conversational devices, these are casually popular as virtual assistants. For instance, Siri, Alexa, Google and more. WebRTC is being predominantly used by device manufacturers to equip their devices with a number of different functionalities.

For instance, WebRTC powers cloud-based telephone systems, where users can use voice commands or dictation to place calls, send text messages, check voicemails and do more. WebRTC is also used in the development of one-way conversational devices, where its role lies in testing and optimizing device responses through repeated simulations.

WebRTC is an inevitable aspect in connected and autonomous vehicles. These are vehicles with complex operational architecture. They are made up of several sensors and embedded systems that make driver-less or assisted driving possible in the real world.

For an autonomous vehicle to make one simple driving decision on whether to change lanes due to an approaching pothole or stop abruptly, tons of data from multiple sensors are collected, processed and transmitted for real-time decision making.

WebRTC lies at the heart of all this communication. It’s responsible for –

Though these are just simplified processes to give you an overall idea, WebRTC does a lot more under the hood, making it one of the crucial use cases for the evolution of the vehicles of the future.

The delivery of remote assistance to troubleshoot technical issues and equipment glitches is no longer just subjected to video elements or chats. In fact, the entire communication process is becoming more immersive. Thanks to the advent of captivating technology like AR (Augmented Reality) With its integration with WebRTC, remote assistance can be optimized.

This means technicians can assist users in troubleshooting and fixing concerns by themselves remotely by appearing virtually over a real-world environment, new surgeons or doctors can learn about surgeries from outside the operating room in real-time and more. If being omnipresent is going to be the future, WebRTC is at the fulcrum of it.

The capabilities and potential of WebRTC is wide right now and innovations in this space are influencing the evolution of IoT development services as well. To sum up the role of WebRTC in IoT ecosystems, here’s a quick list of its diverse applications:

Right now, we are all experiencing the marvel of WebRTC and IoT without having an idea about it.

We are sure that going forward, you would be able to recognize communication channels among devices and machines and understand if WebRTC had a role to play in it.

As WebRTC continues to expand and IoT becomes more narrowed down in terms of its implementations, we will see newer use cases of both the technology’s integration across market segments and industries.

This site uses Akismet to reduce spam. Learn how your comment data is processed.

starting from $8 per month

Have You Found Out a Right Software for Your Business? Request a Demo Now
Free Demo Request
Compare 0 items
Not found
Fill up the form to get free demo
Want to Know this Software Price? Fill the form and you will get the pricing immediately!